Tonight the Pittsburgh Penguins will finish up their extended home game stretch against the Dallas Stars before heading to Nashville. The Penguins have won three straight during this five-game home streak, only allowed six goals, have scored nine goals, and their penalty kill percentage was 90.9% during the stretch.

The Stars are a team with great speed and scoring ability. The Stars have the reigning National Hockey League scoring Champion, Jamie Benn on the team, along with Tyler Seguin. They currently rank number two and three in the league with 10 points each.

The Penguins defense will have to keep a sharp eye out for these two guys speeding into the zone and getting the puck. They seem to sneak behind guards and by the time they notice, it is too late to do anything about it. One of the guys on defense that will make sure to keep the net area clear is Olli Maatta, who has been a plus player in each of the last four games. Also, the shutdown pair of Kris Letang and Ian Cole will have to be on point. Marc-Andre Fleury will have to hold down the fort, and he has been up to the task before. Fleury has 51 wins in the month of October, which ranks first among all goalies since 2003-04. He will make his seventh consecutive start. 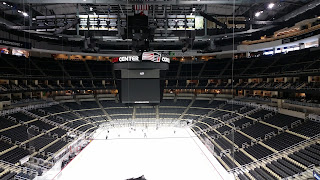 The team will also have some additions to the lineup, as Pascal Dupuis will return to the lineup tonight. He missed the first six games with a lower-body injury. It will be interesting to see where Johnston sticks Dupuis into the lineup. It will be a nice, refreshing addition. Whenever, Dupuis is on the ice, he seems to bring a new energy and excitement. I hope he can spark the Penguins into action.
Now the Penguins have to keep to their game, dump pucks, battle for pucks, and get shots on net tonight. They opened up the scoring in their last game against the Florida Panthers, so I hope they keep that up. Sidney Crosby put everyone’s minds at ease, but who was worried to begin with?

During the Panthers game, Crosby had one goal, two assists, nine shots (tied a career high), and three points. They just have to stay focused for the full 60 minutes, not let things fall by the wayside.


In addition, tonight is Hockey Fights Cancer night! Time to get a win at Consol and raise some awareness and money for this great cause! Lets Go Pens!

The Pens lineup is as follows:

Fleury between the pipes!

3rd Period
0:00 - That is all for this horrible game as the Pens fall 4-1 to the Stars. Here is to hoping that a different team shows up in Nashville on Saturday.

3:12 - Bonino is elbowed right in the face and that one hurt. Demers goes off. 5 on 3 power play for Pens and Fleury was pulled again.

3:33 - The Pens short power play ends, but Vernon Fiddler goes off. Power play for the Pens and they pull Fleury.

13:48 - A lot of whistles for this period. Not much offensive being generated for the Pens as the Stars are staying back and jamming up the zone entry.

20:00 - One more period of regulation left! The Pens have to wake up and get something going! Lets Go Pens!

1:17 - Dupuis jumps up onto the Malkin line and almost gets a goal in tight. He is trying to stir things up and get things going.

4:08 - That brings an end to the power play. Nothing special.

6:08 - Power play chance for the Pens, they need to do something on this power play that is beneficial.

6:58 - Mattias Janmark scores. Just an outright shooting on Fleury as the defense has been lack luster. I feel bad for any goaltender having to play with that kind of defense. Janmark was left wide open in the slot. 4-1 Stars

8:40 - BONINO SCORES! HIS FIRST AS A PENGUIN! Bonino gets the puck and works his way out from behind the net to the side! He goes around a defender and makes a no look shot! He elevates it right over the glove of Niemi! 3-1 Stars.

10:47 - No shots in the first nine minutes of the period for the Pens. They have to find their spark in this game to get things going. They look flat.

14:53 - Jason Spezza scores. Perron passes the puck directly to Spezza in the high slot and he rips a fast shot past the glove of Fleury. Another horrible turnover and this one came back to bite them. 3-0 Stars

16:06 - The Pens once again turnover the puck in the neutral zone. They need to clean things up or the Stars will be winning this one.

20:00 - Time for the second period! The Pens have a power play to start for another 1:07! They have to capitalize on it! Lets Go Pens!

0:53 - Radek Faksa trips up Letang and heads to the sin bin. The Pens get a late power play.

4:55 - John Klingberg scores on the power play. Fleury is completely screened as a Star player is camped right in front of him. Klingberg fires just as Fleury is looking around the other side, the puck goes glove side and into the net. 2-0 Stars.

5:39 - Hornqvist flips the puck over the glass in the Pens' zone, so he takes a seat for delay of game. Stars get another power play opportunity.

7:23 - Kessel slides the puck from behind the net to Kunitz in the slot, but Kunitz can't get a good shot off. Good idea.

9:05 - Johnny Oduya scores. Oduya fires from the point and Fleury seems to loss sight of it. It goes over his right shoulder. 1-0 Stars

11:01 - The Stars are called off-sides once again, they are having trouble staying on-sides.

11:38 - Cole blocks a shot and gets the puck going the other way. He heads to the locker room, but comes back looking ok.

17:30 - Malkin gets behind the defense, but Niemi makes the save!

18:48 - Perron is going to the box for boarding and the Pens get a power play chance.

20:00 - The puck has dropped on Hockey Fights Cancer night at Consol! Time for the Pens to wrap up this five-game home stretch with a win! Lets Go Pens!
Posted by MF at 7:10 PM

MF
Founder of The Pens Hockey Show and site writer. Email me at penshockeyshow@gmail.com if you have any questions.